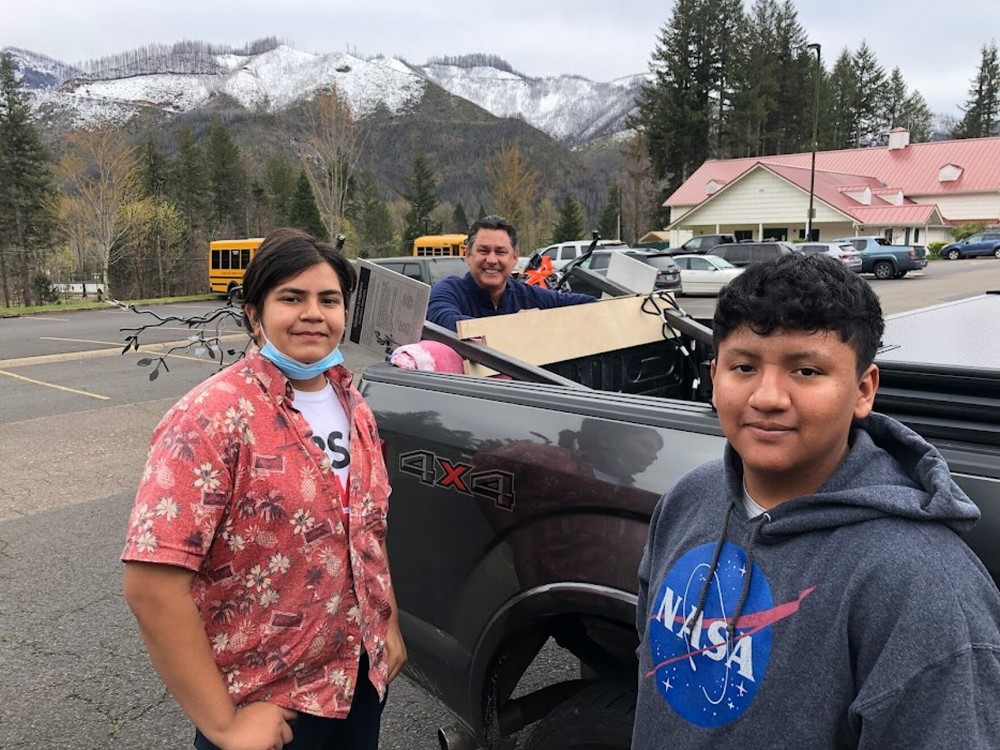 A year and a half past the catastrophic wildfires of 2020, McKenzie Schools were gifted with a symbol of resilience from an affected district from southern Oregon this week.

Students with the Phoenix-Talent district drove up Monday morning and delivered a metal sculpture of Manzanita branches, a tree that’s fire-resistant.

Superintendent Brent Barry traveled with the group, and told KLCC that he became choked up while traveling through the McKenzie River Corridor.

“You just see the burn scars and things that kinda bring back memories, which makes it even more important to stay connected with our friends that went through similar tragedy as us.”

Eighth grader Aaron Chavez said his area was ravaged by the Almeda Fire, much like the Holiday Farm Fire did to this district.

A small group of Phoenix-Talent students were given a tour and shared lunch with a group representing McKenzie Community School. Among the welcoming party in Blue River was junior Spencer Hayes.

“Even though these schools had gone through a very hard time like we did, one of their first thoughts was to help other schools in similar situations,” said Hayes. “I hope that we can do something similar.”

McKenzie School District Superintendent Lane Tompkins said he was moved by the gesture. He said they’re still finalizing just where to put the branch sculpture.

”We want it to be out by the rebuilt stadium complex to kinda show the shared experiences of both of our communities,” explained Tompkins. “So it’ll be a good homage to the fire and rebirth of that complex which is important for our community.”

The McKenzie River community was hit hard by 2020’s Holiday Farm Fire. The Phoenix-Talent area was ravaged by the Almeda Fire around the same time. Altogether, 2020 is regarded as the worst wildfire season in Oregon’s recorded history.

Both Tompkins and Barry agreed it’s important to support and honor each other’s communities, as they continue to rebuild.

After the presentation of the Manzanita sculpture, Barry mentioned his group would deliver another one to Santiam Canyon District Schools, which has also seen hardship brought on by wildfires.