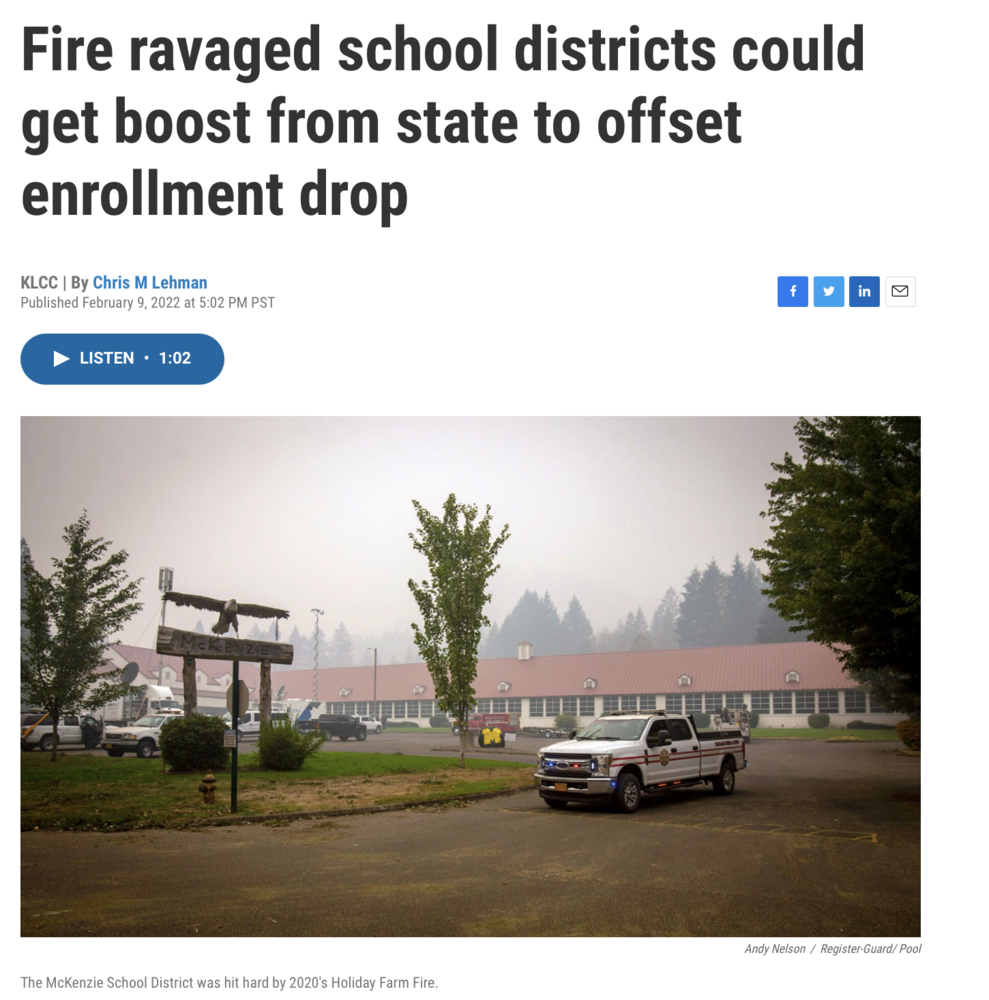 Four Oregon school districts hit hard by wildfires in 2020 could get a boost from state lawmakers.

State tax dollars are distributed to public schools based on attendance. That means that when enrollment drops, so does the funding; even if the reason for the loss of students is a natural disaster.

Lane Thompkins is the superintendent of McKenzie School District in eastern Lane County, which was devastated by the Holiday Farm Fire. He told the Oregon House Revenue Committee that nearly a quarter of the district's students lost their home in the September, 2020 blaze.

Oregon lawmakers are advancing a bill that would temporarily tie funding for districts hit by wildfires to what their enrollment numbers were before the fires. Other eligible districts are the Santiam Canyon District in eastern Linn and Marion Counties, which was hit by the Beachie Creek Fire; the Lincoln County School District, which was hit by the Echo Mountain Complex Fire; and the Phoenix-Talent School District in Jackson County, which was devastated by the Almeda Fire.

“In the meantime, the school district is making Herculean efforts to reach out and stay in touch with families, including operating buses that go far beyond their normal routes," said Marsh. "But because school funding is predicated on attendance, the district stands to lose millions of dollars in revenue during this period of critical rebuilding.”

Marsh is one of the eight sponsors of House Bill 4026. Other sponsors include both Democrats and Republicans, and include Senate President Peter Courtney, D-Salem. The House Revenue Committee voted unanimously to send the bill to the legislature’s budget committee, where it awaits further action.

A similar measure died in that committee in the 2021 session.

"We found out on the day before the end of session that the bill had simply fallen through the cracks," said Marsh. "We panicked, but we were assured by legislative leadership that we would pick up this again in 2022."